Through a Glass Darkly

In the first part of the God and Man trilogy, a writer of popular fiction charts his daughter's mental illness as the basis for a novel. 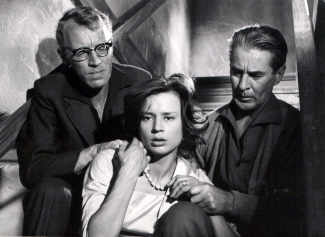 "You're empty but capable. And now you're trying to fill your void with Karin's extinction. But how will God fit into that? It must make him more inscrutable than ever!"
Martin to David

The first draft of what was to become Through a Glass Darkly is in the form of a note on the last page of the script for Bergman's preceding film, The Virgin Spring. It begins with the words: 'THE WALLPAPER. She who is small and gets a story about the room with the mysterious wallpaper. Then one day she experiences it.'

Karin is played by Harriet Andersson. If her role in Summer with Monika was her big breakthrough, the aforementioned complex character constituted her second big break. Gunnar Björnstrand plays her father, a writer who uses her psychosis in his novels. Of the four actors in this chamber piece, Lars Passgård was definitely the beginner of the bunch. At the age of 18, he was confronted with the challenges of relating to a dead mother, a distant, suicidal father and an insane big sister, who also molests him.

Through a Glass Darkly is often referred to as the first part of the 'God and Man trilogy'  of which Winter Light and The Silence make up the second and third, respectively. The film was Bergman's second complete collaboration with Sven Nykvist and the first of his films to be shot on Fårö. It was, in fact, Nykvist who recommended the island to Bergman.

Harriet Andersson would later comment on shooting the film: 'Back in those days, exterior shots were allowed to take their time, and it shows. There are some insanely long tracking shots that called for extensive rail work. Nowadays they run around with theses tiny cameras, no wonder that they don't need any rails.'

Through a Glass Darkly was Sweden's contribution to the Venice Biennale in 1962. It won the Oscar for best Foreign Language Film the same year.

Bergman writing on the genesis of the film in Images: My Life in Film:

When the film was in its planning stages, it was called The Wallpaper. I wrote in my workbook: "It's going to have a story that moves vertically, not horizontally. How the hell do you do that?" The note is from New Year's Day 1960, and even if it was strangely expressed, I understood exactly what I meant: a film that went into an untested dimension of depth.

My worbook (middle of March):

'A god speaks to her. She is humble and submissive toward this god whom she workship. God is both dark and light. Sometimes he gives he incomprehensible instructions, to drink saltwater, kill animals, and so on. But sometimes he is full of love and gives her vital experiences, even on the sexual plane. He descends and disguises himself as Minus, her younger brother. At the same time as Minus, her younger brother. At the same time the god forces her to swear off marriage. She is the brige awaiting her groom; she must not let herself be defiled. She pulls Minus into her world. He follows her willingly and eagerly since he exist on the border of puberty. The god throws suspicion on Martin and David and creates the wrong impression of them in order to warm her. On the other hand he endows Minus with the strangest qualities.

What I wanted, most deeply, was to depict a case of religious hyteria or, if you will, a schizophrenic individual whith heavily religious tendencies. Martin, the husband, struggles with his god in order to win Karin back to his worl. But since he is the type of person who needs that which is tangible, his efforts are in vain.'

Then I find this in my workbook:

'A god descends into a human being and settles in her. First he is just an inner voice, a certain knowledge, or a commandment. Threatening or pleading. Repulsive yet stimulating. Then he lets himself be more and more known to her, and the human being gets to test the strength of the god, learns to love him, sacrifices for him, and finds herself forced into the utmost devotion and then into complete emptiness. When this emptiness has been accomplished, the god takes possession of this human being and accomplishes his work through her hands. Then he leaves her empty and burned out, without any possibility of continuing to live in this world. That is what happens to Karin. And the borderline that she crosses is bizarre pattern on the wallpaper.'

Parallel with the carefully chosen words exists a contrasting harsh concept of how the god I have created actually looks.

Generally speaking Through a Glass Darkly was positively received, and the tone of the reviews can be broadly summed up by Robin Hood at the end of the piece he wrote in Stockholms-Tidningen: "It cannot be gauged by ordinary film standards. Yet one can say that it is Bergman's most significant film, the final point in the protracted development of his qualities." A number of reviews, some of them critical, discussed the notion of the morality and character of the artist as evinced in the film.

The ambivalent attitude of the critics towards the central problems of the film is highlighted in Pär Rådström's review in Bonniers Litterära Magasin:

'My task is to review films. Some films are art. Ingmar Bergman's Through a Glass Darkly is art. And as such, it can be reviewed as art would be. Let me just say, therefore, that the creator of this work of art is obviously ashamed of being an artist. And that this, to a certain extent, affects his artistry through fear, yet it also gives it its tautness. The problem appears to be insoluble.'

The same line of reasoning was taken up by Artur Lundkvist, writing in the film magazine Chaplin:

How far is Bergman aware of what he has expressed or has wanted to express in his film? It seems as if he put his faith as far as possible in inspiration, in art as self-supporting magic. But then he draped it in a measure of more or less misleading rationalisation, external clarification, perhaps with the intention of not giving away too much of himself. This inadequate clarification of his own motives appears to furnish him with the feelings of guilt towards art to which he constantly returns. The process seems to be intimately linked with the terms under which he works, a fruitful concealment of the forces that one often discerns in Bergman as the sign of an "adolescent neurosis" that has not left him. Lack of clarity as to content and purpose often conspire to make Bergman's films disturbing and interesting, seductive and challenging precisely because of their ambiguity. This is the artistic dilemma that both drives him forward yet runs the risk of dragging him down, since it is both his strength and his weakness.

Martin: You're hunting for themes. Your own daughter's mental illness. What a great bloody idea!

Martin: You're empty but capable. And now you're trying to fill your void with Karin's extinction. But how will God fit into that? It must make him more inscrutable than ever!

David: I don't know whether love is proof of God's existence, or if love is God.
Minus: For you, love and God are the same?
David: I rest my emptiness and my dirty hopelessness in that thought.

Through a Glass Darkly is the first in a trilogy that includes Winter Light and The Silence. The search for God, which is complicated by and confused with lust and madness, is the central theme of this trilogy. Karin (Harriet Andersson), daughter, wife, and recently released mental patient, convalesces at her family's seaside summer cabin, where the men in her life have hardly a clue what emotional sustenance the confused and delusional woman might require. Her father (Gunnar Björnstrand) and husband (Max von Sydow), both cold, self-absorbed intellectuals, distance themselves from the recovery process while Karin increasingly fixates on her vulnerable and sexually susceptible younger brother. That Karin is to be consumed in the search for God is the film's ever-controversial premise, made all the more provocative by the implied eternal detachment of Bergman's (significantly male) God. 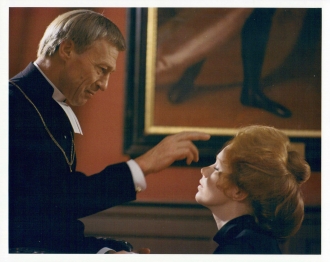