Four sisters-in-law talk about their marriages in a series of humorous episodes. 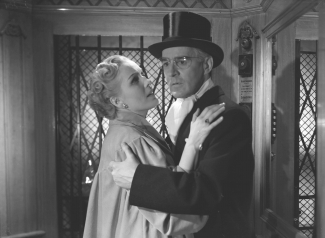 "Ingmar Bergman depicts people like a fish monger skinning a fish: a few swift cuts with the knife reveal what lies underneath."
Karl Ekwall in Aftontidningen

Ingmar Bergman had not directed a feature since the fiasco of High Tension. All he had done in the meantime was co-write a screenplay and direct a handful of commercials. What he needed, quite simply, was to set things right. Bergman in Images: My Life in Film:

The idea for the film came from my wife at the time, Gun Hagberg. Before we met, she had married into a large family with a big summer place on the Danish island of Jylland. Gun told me how one evening the women of the clan remained sitting at the table after the evening meal and how they began to really talk to each other. With great openness they spoke of their marriages and their loves. I thought this an excellent framework for a film consisting of tree stories. My financial situation after the production standstill forced me to sign a second-rate (to put it mildly) contract with Svensk Filmindustri. I was painfully aware that I had to come up with a successful film. In other words, a comedy seemed an absolute necessity. Such a comedy was manifested in the third episode of the film: Eva Dahlbeck and Gunnar Björnstrand in the elevator. For the first time, I heard an audience laugh at something I had created. Eva and Gunnar had experience in comedy and knew exactly the many ways to skin a cat. That this little comedy routine in the narrow space of the elevator was funny is completely thanks to them.

The French critic and fellow director François Truffaut has claimed that Waiting Women was probably influenced by Joseph Mankiewicz's marital comedy A Letter to Three Wives (1949). Bergman himself has admitted that the lack of dialogue in the central episode was inspired by two films by the 1930s Czech director, Gustav Machaty (Extasy and Nocturne), both of which were almost entirely devoid of dialogue. 'I saw Ecstasy when I was eighteen years old, and it deeply affected me. This was partly a natural reaction because, for once, one was allowed to see a nude woman on scene, but more important, because the movie told nearly everything through images alone.'

In Bergman on Bergman the interviewers asked Bergman how he worked up the film's famous elevator scene: 'Thanks to Hitchcock, particularly, I'd long been intrigued by shooting long sequences in difficult and cramped circumstances, weeding out everything irrelevant – quite simply, in making things hard for myself.'

Shooting took place during the spring of 1952, from the beginning of April until the end of May with a few extra days in the middle of June to tie up some loose ends. The swimming pool  with its live pike and the lift were constructed in the Råsunda studios. The cramped spaces, together with Bergman's desire for long, coherent takes, made great demands on the cinematographer Gunnar Fischer. His efforts were summed up by Lasse Bergström in the following words: 'He is the cameraman who has imbued every image in this film with a unique lustre and a unique beauty. With a collaborator like this, Ingmar Bergman will never falter.'

This film, the eleventh directed by Ingmar Bergman in his own right, was regarded by the critics as his first comedy. Some of the reviewers noticed that the first episode was a re-working of Bergman's own stage play, Rachel and the Cinema Doorman.

"Do not let any potential prejudices you might have about the solemn, 34-year-old Ingmar Bergman frighten you off this his thirteenth film and the ultimate test of his maturity," wrote Filmson in Aftonbladet: "Without in any way compromising his fitting stance as a hard-bitten portrayer of manners and a challenging moralist, he has produced his most versatile yet also most consistent and harmonious film to date, surprising everybody, perhaps, in the guise of a brilliantly witty writer of comedy, and one with claws in those silky paws of his.

Writing in Aftontidningen, Karl Ekwall was also of the opinion that the film's writer and director had certainly not lost his touch: "Ingmar Bergman depicts people like a fish monger skinning a fish: a few swift cuts with the knife reveal what lies underneath. Smiling gleefully he holds up the bare bones, calling the procedure a comedy, or a light embroidery set against a dark background." Ekwall also noted new elements in Bergman's filmmaking, "softer, more intimate tones than before, more understanding for human frailty."

Most enthusiastic of all (as ever, one is tempted to observe), was Lill, writing in Svenska Dagbladet:

The risk in writing a review of Ingmar Bergman's latest film is of losing oneself in enthusiastic superlatives. But truly it is not easy to maintain critical restraint in this case. Waiting Women is a series of vignettes in which Bergman the director and poet of the screen pours out his imagination and ingenuity, his compassion for humankind and his cutting, effortless and warm humour as if from a horn of plenty and in which he displays his technical virtuosity as never before. This time, moreover, he has completely refrained from melodramatic exaggeration, from caricature and juvenile paroxysms. Retaining all his empathy with fresh-faced, mixed-up youth, with those who are lost or abandoned, he has also achieved an understanding for the compromises of middle age, discovering that it does not necessarily have to be populated by corrupt monsters in human form, and that resignation can also have its own gentle melancholy that can be borne with a humour devoid of callousness.

Most critical of all (as ever, one is tempted to observe) was Staffan Tjerneld in Expressen. In intellectual terms he regarded the film as "pure, unadulterated candyfloss," and "pornography in a form acceptable to a middle class audience." He found himself ready to offer up "a silent prayer for an evening of Swedish film in which the actors are wearing more than their nightclothes, where the bed is not the only piece of furniture and where the plot revolves around something different. It does not matter what. Yet we are not a nation of sex addicts."

Secrets of Women is essential early Bergman, offering glimpses of what is to come but with a freshness of spirit that gracefully eludes the tropes of genius. Scenes from several marriages emerge when five women, all related, gather to await the arrival of their respective husbands at an island summer house. Each agrees to tell the others a crucial episode from her marriage. With the men relegated to narrative objects, Secrets plays like Cukor's The Women, stripped of its distanced, brittle comedy. In its place, the intimate, revealing encounter, the sudden knowledge of self and other that irreparably changes a marriage-despite appearance to the contrary. Mixing the wistful humor of averted tragedy with a rare elegiac optimism, this film announced Bergman internationally as a director with a unique understanding of women-more precisely, of what women know about men.